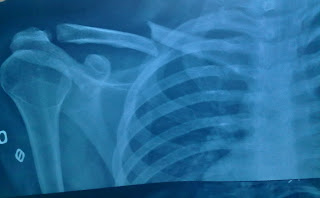 I managed to cause myself a clavicle bone fracture through a horrible car accident, the pain was severe & insurmountable to begin with.. I screamed like i was dying at the hospital and couldn't stop till my leg coincidently supported my arm & stopped it from moving the bone so they could give me Pethidine (analgesic used for pain particularly after an operation or during child birth). I have learned & observed things throughout this experience...

1. When you are in severe pain, no other thought crosses your mind, no thought whatsoever.. only the pain you're currently feeling, if it lasts for a minute, all you think of is the pain during this minute.. You scream as a failed attempt to escape the pain, when you're out of breath, you find out the pain is still there, so you scream louder, the pain is still there, you scream way louder, infinite loop... till something, anything happens..

2. Pain killers never kill bone fracture pain, they only get you high enough to shut it up or put you to sleep.

3. When someone is screaming loudly when you touch their arm, that means they're in pain and Not they're rude, don't take it personally.. ugly doctors!

4. Such events reveal true friends, the ones I didn't even need this event to reveal... my best friend, the one who I first called when i was waiting for the ambulance, who immediately left work & came to the hospital, who stopped the fucked up nurses from touching my hand, and who eventually stayed with me daily since then!

5. First thought that came to my mind when I could think, was why the hell do ppl have children... was this life very fancy that they wanted to get us to try it!! Don't curse more ppl with this life...

6. After that, I felt for every creature who had ever broke a bone...this is me, a basic human, not even a mother.. just someone who felt it and wished I could have the power to erase such pain from existance... then it hit me, how could God, the one who said he's the Most Merciful, the Dispenser of Mercy, how could he allow this to happen!

Email ThisBlogThis!Share to TwitterShare to FacebookShare to Pinterest
Labels: ..., My Philosophy, She

7amdilah 3al salameh... never broke a bone or had stitches or anything like that, so I can't really relate to it, but i would imagine that breaking a part of your skeleton is as bad as it can get.

actually i tried this pain before as my arm was broken 2-3 times before.

but when i passed through such cases i was remembering Allah and my worship and the people i like... i was wondering wat would they do if they know what i am passing through.

i tried my best to hide my pain infront of doctors or anybody else.

i understand these accidents as if it is a message from Allah to increase my good deads or as a punishment for a guilt i did.

when my arm was broken i have made a bad thing just before.

Do you participate in polls?